Responsibility means taking action and making a difference and a key part of Taaleri’s strategy. 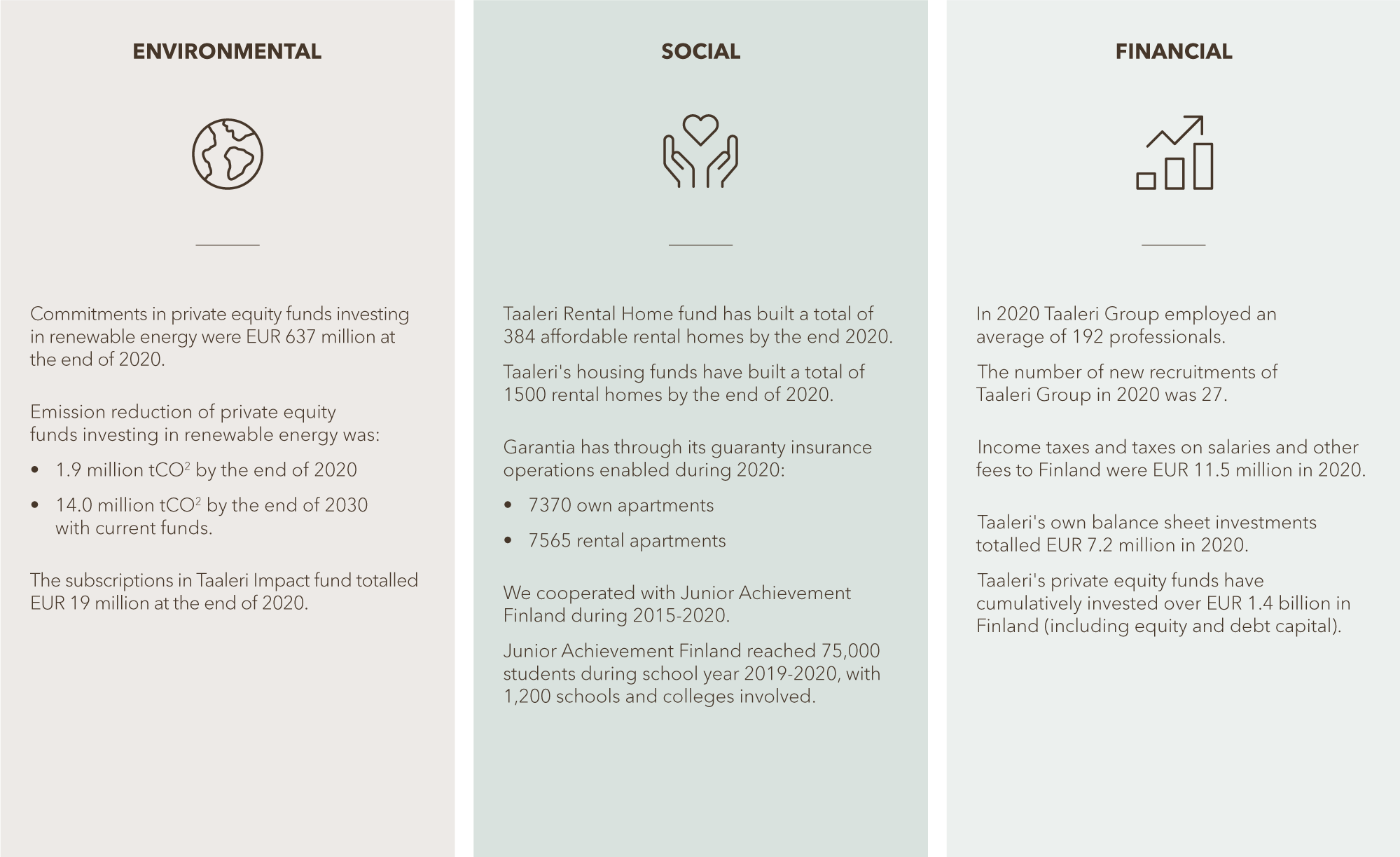 We’ve succeeded in reducing a remarkable 1.9 million tonnes of CO2 emissions through our renewable energy funds.

Through our private equity funds, co-investments and other investment activity, we have developed projects that have created jobs and the prerequisites for social development. Through our Rental Home fund, we seek to diversify and facilitate the availability of reasonably-priced rental housing in Finnish growth centres.

Our Circular Economy fund channels investments into Finnish growth companies operating in renewable energy and energy efficiency. Through our Africa real estate funds, we lay the groundwork for social development in Kenya, Rwanda and Mozambique.

The Energia segment’s first fund that invests internationally in wind and solar energy was established in the summer of 2017. Its renewable energy projects reduce greenhouse gas emissions.

Taaleri was a supporter of Junior Achievement Finland’s operations 2016-202. The non-profit organisation’s operations are based on experiential learning for young people and on active collaboration between schools and the business world. Together we want to have an impact on the working skills of young people, their entrepreneurship know-how and attitudes, and their financial skills.

Our previous targets of investment

Taaleri and the professional football club HJK signed a three-year agreement in 2016 for financial support to HJK Akatemia.

HJK Akatemia’s mission is to be the best route for young players invested in football to realise their dreams. High-quality work with young people starting from an early enough age significantly improves their opportunity to make it through the domestic leagues and on to the tougher European leagues.

HJK Akatemia is the first professional effort in Finland to build a path to European fields. In 2017 Taaleri’s sponsorship team won the Finnish championship in the B17 boys category, and HJK B17 won the very tough level international (U17) Festival d’Armor tournament held in Plougonvelin, France, on 3-5 June.

Otto Ollikainen, Valtteri Olsbo, Tuomas Pöyhönen, Maximus Tainio, Julius Tauriainen and Seth Saarinen were the HJK players representing the Finnish national team in the U17 age category during the season. Santeri Väänänen played on the U16 national team. At the end of the season, many of the team players moved up to the Klubi 04 team playing in HJK Ykkönen. During the season, HJK’s n Seth Saarinen (b. 2001) signed a two-year agreement with FC Zürich playing in Switzerland’s main league, and Maximus Tainio (b. 2001) transferred with a two-year Akatemia agreement to Tottenham Hotspur FC. Additionally, Otto Ollikainen (b. 2001) signed a 2-year agreement with HJK’s league team in September. From a Finnish perspective, these are exceptionally fine results, and it has been a pleasure to be involved in making them happen.

NoBot is an exceptional company with a vision to offer young people work and, above all, experiences in influencing and participation, i.e. the prevention of social exclusion at its best. We have invested in NoBot to help the company in its initial journey.

The Nutty Tarts duo (Katriina Haikala and Vilma Metteri) challenge the prevailing social norms that prevent individuals from developing. Their work engages and encourages the public, communities and individuals. Dystopia/Utopia is an art project based on photography and scenario work that is implemented by young people who are within the sphere of child welfare services.

The project, aimed at people 12-17 years old who are at risk of social exclusion, has five participants at a time. The young people and the artists collaborated with the parents or guardians of the young people, child welfare services and facilities. The project was implemented three times in 2013-2015 in collaboration with companies and municipal child welfare services.